Halfeti is one of the most extraordinary places in Turkey with its three thousand years of history. Throughout its history, the city called with different names by many civilizations.  Although some parts of it were submerged after the construction of the Birecik dam that is built-in 2000, the city has many unique beauties and historical heritage. Among these unique values of the city, the black roses known as “the Crying Arab Girl” by the local folk, grow only in Halfeti according to a famous urban legend. 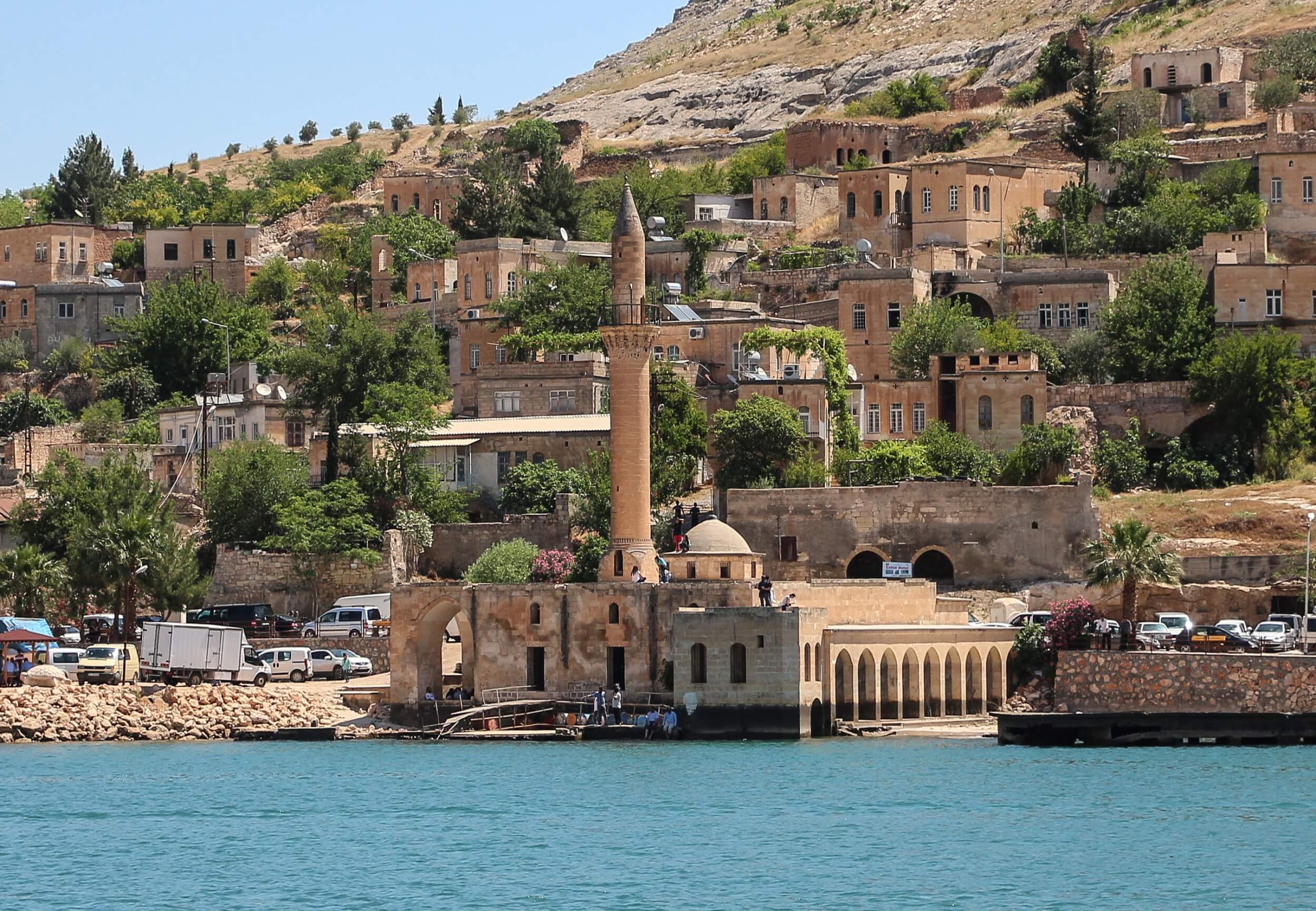 The name of Halfeti, also known as Rumkale, is believed to come from a story of immortal love. Rumor has it that two young people, Halil and Fatma, who love each other want to marry but their families don't allow them to be together. Thereupon, Halil and Fatma held hands and left themselves in the raging waters of the Euphrates. In their memory, the district became known as Halfeti, an abbreviation of Halil and Fatma.

Halfeti, which is one of the western districts of Şanlıurfa, is located on the border of Gaziantep. The district on the shores of the Birecik Dam Lake is adjacent to the districts of Birecik and Bozova and is 112 km from the Şanlıurfa city center.

How do I get there?

You can go to Halfeti from Şanlıurfa by minibus, taxi or private car from the city center. You can check for Şanlıurfa flight tickets with the best offers.

How to get from Şanlıurfa GAP Airport to Halfeti?

Unfortunately, there are no bus and minibus services from Şanlıurfa GAP Airport to Halfeti. Those who want to go to Halfeti by public transportation should first go to Şanlıurfa city center, which is 36 km away from the airport. From here you can go to Halfeti by minibus or by going to Birecik with bus from Şanlıurfa bus station and taking the minibus from Birecik to Halfeti. Another option is car rental and the distance between Şanlıurfa GAP Airport and Halfeti is 123 km and the journey takes approximately 1 hour and 30 minutes.  If you plan to rent a car, you can get support from the Pegasus Car Rental service.

Directions from Şanlıurfa to Halfeti Although it was submerged after the construction of the Birecik dam, Old Halfeti still preserves its touristic value. The houses built by Armenian stonemasons, the minarets rising under the water, the black roses and the spectacular Euphrates River attract visitors. 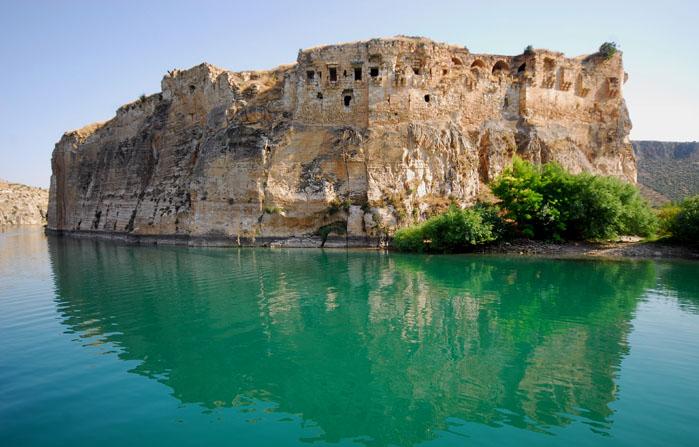 RumKale is a historical area on the Euphrates river that dates back to the 800s before the historical date. In the vicinity of the building, which has been restored in recent years, there are ruins of many historical buildings such as Saint Nerses Church and Barşavma Monastery.

St. Nerses Church, which was built in 1173, is located to the south of Rumkale. Built-in Gothic style, this building is one of the must-visit places in the region.

You can find the cities closest to this region below.

Transportation to Halfeti via taxi

If you plan to go to Halfeti by taxi, you can take a taxi from Şanlıurfa GAP Airport or the city center. You can negotiate with the driver as the distance between Halfeti and Şanlıurfa is long for a taxi ride.

Transportation to Halfeti via public transport

The most used public transportation to go to Halfeti is the minibusses departing from the bus station. Another option is to go to Birecik and then take a minibus from there. Many private bus companies are serving between Şanlıurfa city center and Birecik. The journey takes one and a half to two hours.

History and the Story of Halfeti

The history of Halfeti dates back to 855 BC and has seen many civilizations throughout history. Assyrian king III. Salmanassar established a settlement here and name it Shitamrat. Afterward, the city was under control of Hittite, Assyrian, Med, Persia, Macedonian, Seleucid and Parts. It was an important location in Southeastern Anatolia during the Roman Empire era and after the Roman Empire, it came under Byzantine rule. Despite the rule of Umayyad, Abbasid, Seljuk, Zengi, and Eyyubids, the settlement, also known as Rumkale, remained outside the territory of Muslim states. After the reign of the Armenians during the Crusades, Rumkale / Halfeti came under the rule of the Mamelukes and finally, during the reign of Yavuz Sultan Selim the Ottomans. The city, which lost its strategic importance after this time, is one of the important places in Turkey that has a very important historical heritage to our day. The area under the waters of the Euphrates River with the construction of the Birecik Dam in 2000 is now known as Old Halfeti. The Old Halfeti region still keeps its unique historical value under and above the Euphrates.

Halfeti is also known as the land of Black Roses. It is said that black roses grow only here in the world and there is even a story told by the public. According to the story, the black rose was seen as the rose of the devil and nobody was touching it. Only sorcerers were allowed to make rituals around the black rose. One day rose looked like a medallion to an innocent country girl. After she touched it every one blamed her for being a witch and crucified her. After she passed away devil cursed the city by its words: "The red rose will grow everywhere and symbolize love, but my love, the black rose, will remain as a trace of pain in this land." Even though it is a sad story the beauty of the black roses here is legendary.

Things you should know about Halfeti 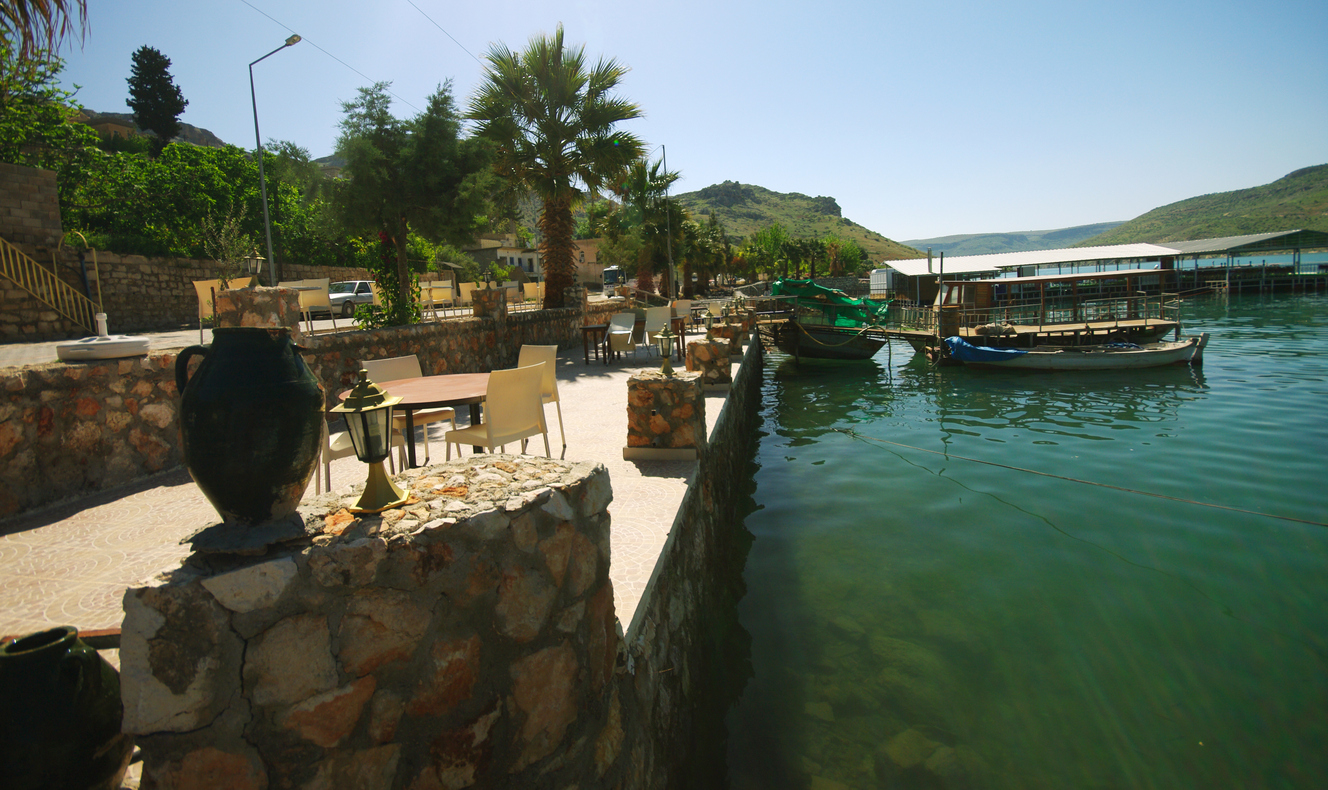 The historical sites in Halfeti are located on the banks of the reservoir. The best way to visit these areas and see all the beauties of Old Halfeti is to rent a boat. Especially recommended for photography enthusiasts.

Halfeti is a very quiet town on the banks of the Dam Lake. Despite its touristic activity, the region, which has been constantly changing hands throughout its history, became Cittaslow in 2013 and became one of the 15 Cittaslow cities in Turkey.

Foods to try in Halfeti

In addition to boats by the lake, you can find restaurants and relaxation areas. You can relax here and taste the delicious food while enjoying the calmness of the city. Halfeti kebab and Shabut fish are among the ones we recommend.

The climate in Halfeti is warm and temperate. There is more rainfall in the winter than in the summer. The average annual temperature in Halfeti is 17.7 ° C. About 458 mm of precipitation falls annually.

After attracting attention to its history, tourism in Halfeti has increased considerably. With the increase in tourism, the number of hotels in the region has increased and there are hotel options for different budgets. Kasr-i Canan Hotel, Rosa Hotel Halfeti, Sitamrat Hotel are the ones we recommend for you.

You can also read these: