The Czech Republic is one of the countries located in the central Europe. Nowadays, it also is known as Czechia. Due to being at the centre of the continent, the country has witnessed a number of historical events throughout history and it has been one of those attractive locations for tourists worldwide. Today, Prague, the capital of the Czechia, is one of the most popular destinations amongst tourists. With its lovely and dynamic atmosphere and various activities, Czech Republic offers an unforgettable experience to its visitors. 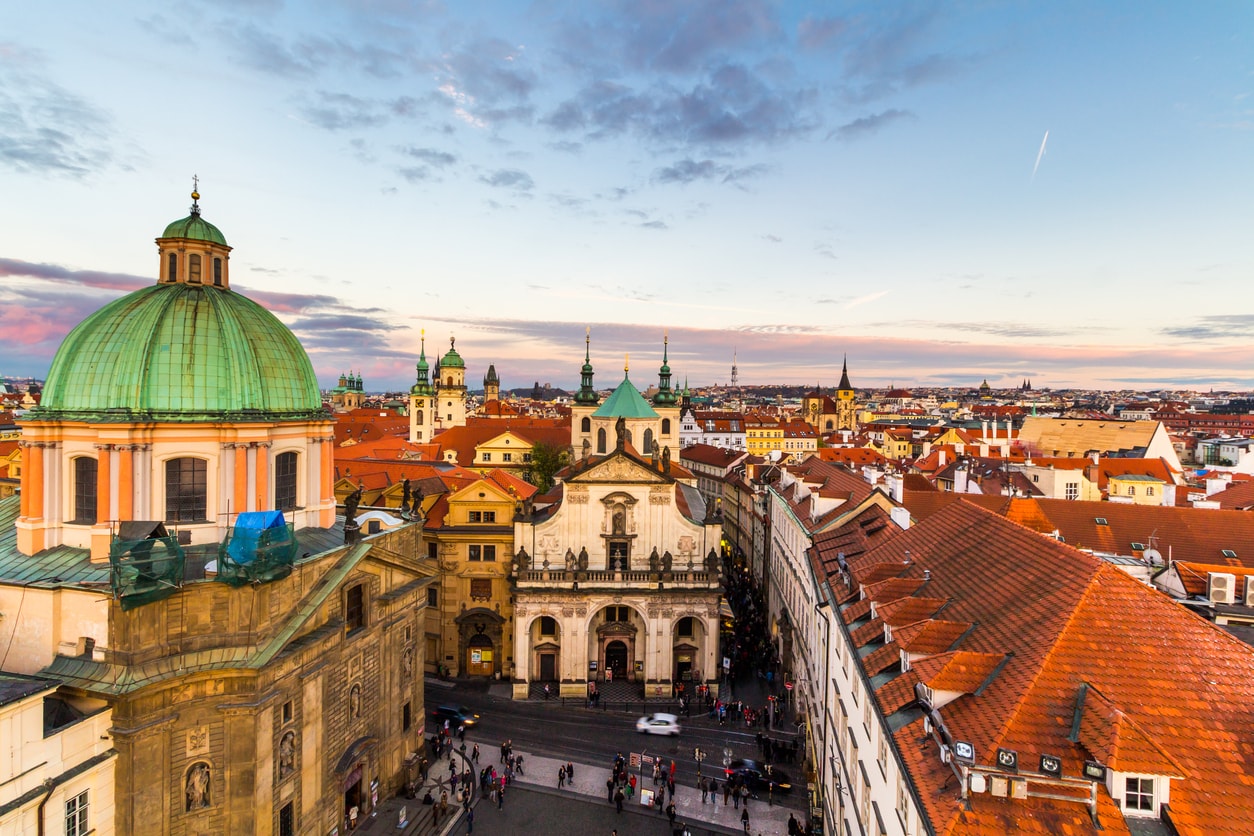 Prague, the capital of the Czech Republic, is also the largest city and the most touristic area in the country.

Like the other countries in the central region of Europe, Czechia has a mild continental climate. Due to the fact that the country has no connection to the sea, it has cool summers. The country has a harsh winters and cool summers. On an average, January, the coldest month, is -2 degrees and the hot period is 20 degrees. On the other hand, the warmest months are July and August.

The main pillars of the national economy are cattle, tourism and automobile production. The most important source of income in the country is the production of cars, trams and subway which makes Czechia the 5th largest producer country in Europe.

The Czech Republic is located in Central Europe. Its neighbours are Poland on the north; Germany on the west and the northwest; Slovakia on the east; and Austria on the south.

The best season for your visit to the Czech Republic is the period from May to September. However, Czechia is also preferred during the period of winter as it has amazing views and snowy landscapes.

How to Get to Czechia?

As it’s in the middle of Europe, transportation will be easy for European countries. Of course, the most practical way to go to the Czech Republic is by air travel. With Pegasus Airlines you can reach Prague in approximately 2 hours from Istanbul.

Despite the fact that it is quite easy to access anywhere touristic in Prague by foot, the rest of the country is not that easy. The most useful way of traveling is subways in the Czech Republic. In the country there are three main subway lines that pass through 57 stops, that are available from 5 AM until midnight. Trams are another popular transport in the country, as well as buses.

The airport is 20 km away from the city centre of Prague. Nonetheless, you can have easy access between those destinations by shuttles, cabs, and buses. In addition, you can take Airport Express buses to go to the train station. It is the most preferred due to offering a more comfortable and easier way to reach the central locations.

Places to Visit in the Czech Republic

Regarding several touristic aspects, the country is one of a kind. It offers a number of sights, including historical and natural ones. As a result of that, the Czech Republic welcomes millions of people every year.

Like almost every European city, the Czech Republic has an old town, which is the oldest district of the capital, Prague. However, it is famous for its magnificent buildings, including bridges, towers, and religious places. It is close to Stare Mesto Vltava. This region, which fascinates its visitors with its hundreds of years of architecture, provides an exquisite route for those who love historical and cultural excursions.

The Charles Bridge was built between 1357 and 1402. The bridge named after the King Charles IV after his request to built it. Completely made of stone, it is closed to vehicle traffic and only open to pedestrian traffic. Along the bridge, there are 30 important sculptures. The historical buildings at the beginning and end of the bridge give the bridge a magnificent, fairy-tale appearance.

Where to Stay in Czechia?

Despite the fact that the city is divided into several areas, its most popular destination for accommodation is the city center. While staying in the centre, you can easily have connections to several parts of the city and other cities of the country. Moreover, accommodating in the city center may help you to catch magnificent views from your hotel.

What to Eat In Czechia?

The Czech cuisine is more about the meat. The beef is mostly consumed in the country following the chicken and pork. You can also try the hunted rabbit, geese and ducks in the restaurants. The most popular traditional dishes of Czech cuisine are roasted duck, Moravian Sparrow, Bramboracka soup and Goulash usually served with dumplings. For the restaurants we can recommend;

Shopping in the Czech Republic: Best Souvenirs to Buy

In order to buy some gifts for your beloved ones or bring something that will remind you of your remarkable moments you can check the many gift shops around the cities. Textile products such as handmade accessories, ornaments, clothes and scarves, country specific design objects can be found everywhere especially in the Old Town.

Things to Know Before Visiting the Czech Republic

Night Life in the Czech Republic

In terms of nightlife, the Czech Republic is an awesome place for those who like to have fun. Tourists can experience the famous pub crawls and go to nightclubs. Especially, in Prague, you can have some remarkable moments that will last for your lifetime.

Holidays and Festivals in the Czech Republic

Due to the fact that the Czech Republic is one of the Schengen Region countries, it requires the same process as the other Schengen Zone countries. In case you need a visa for entering the country, you can visit the nearest Czech Embassy or its website in order to obtain proper information.

Are Czechia and the Czech Republic the same place?

Yes. The country is known as the Czech Republic, but Czechia is the official abbreviation of the country.

Is Czechia a safe country?

The Czech Republic is the safest and least crime country in the European Union. Violations of rules are never tolerated in the country.

Is there any limitation of smoking or drinking in the restaurants?

The Czech Republic does not prohibit alcohol in any way. You can’t smoke indoors.