Associated with the Khan Tengri Mountains and the Epic of Manas, Kyrgyzstan is one of the Turkic republics in Central Asia. Kyrgyzstan is a landlocked and mountainous country. Kyrgyzstan, located at the intersection of different civilizations throughout history, has a very colorful culture. Being located on trade routes such as the historical Silk Road is an important factor in having such a culture. Kyrgyzstan hosts many visitors every year with its unique nomadic culture, historical texture, and natural beauties.

The official language in Kyrgyzstan is Kyrgyz. However, Russian is widely spoken, especially in the northern regions. English is also one of the most spoken languages.

The fact that Kyrgyzstan is far from the sea and has a high range affects the climate to a great extent. The foothills of the mountains are influenced by hot desert winds. In the highlands, a cold climate prevails. There is a rainy climate in the region. The mountain ranges in the west and north receive average annual precipitation of 600-900 mm, southern slopes of 200-335 mm, and high valleys of 100-150 mm. The temperature difference between summer and winter, day and night is very high.

Most of the country's territory is covered with mountains. Mountains up to 3000 meters cover more than half of the land. The Kokpaalatau Mountain Range, which is part of the God Mountains, forms the natural border with China. The peaks of the high mountains are covered with snow in four seasons. Numerous short rivers flow from the mountains down. Its main streams are Narin, Tar, Kubash and Kyzyl Su. Issyk Lake, the second-largest crater lake in the world, is located in the territory of Kyrgyzstan.

The country's economy is based on agriculture and mining. It has an agricultural economy which is mainly dominated by the livestock sector. The main agricultural products are wheat, cotton, sugar beet, corn, tobacco, vegetables, and fruit. Racehorses are raised in the mountainous regions, rabbits are fed, beekeeping is done. Ovine breeding is most common in the country. In Kyrgyzstan, when various materials were started to be extracted in the 1970s, the financial sector developed rapidly. Machinery, automotive, food, cement, glass and canning factories are the main industrial enterprises. The hydroelectric power plants installed on the rivers contribute significantly to the economy. There are around 600 industrial establishments in the country.

The best time to visit the northern part of Kyrgyzstan is from June to September. March-October is perfect for Southern Kyrgyzstan. Summer is great for climbing in lower altitudes- mountain slopes are washed with flowers blooming between April and June.

How to Get to Kyrgyzstan?

It is possible to travel in Kyrgyzstan by minibus, bus, taxi, car rental, and trolleybus. The most commonly used transportation method called minibus called Marshrutka. The marshrutka, which runs from 06.00 to 21.00, is one of the economical ways to travel. Trolleybuses are also a means of transportation which is a mix of tram and bus used in all cities. The trolleybus is the most economical way to travel. Trolleybus tickets are approximately 10 Som. Buses are also an economical alternative. There is no card in the country for public transport. Tickets can also be paid in cash.

The distance between Bishkek Airport and the city center is approximately 25 km. There is no public transport from the airport to the city center. Therefore, you have to take a taxi or rent a car. It is possible to reach the city center within 40 minutes by licensed taxis outside the airport terminal. Renting a car is often preferred. Before you travel, you can take advantage of Pegasus car rental service and travel with your vehicle waiting for you at the airport.

Places to Visit in Kyrgyzstan

Bishkek is the capital of Kyrgyzstan. Bishkek is also the largest city in the country. The city has a different culture with statues of Lenin from the USSR era, the Russians making up 20% of the population and with the fact that Russian is widely spoken on the street. There is even a Putin bar in the city. With its unique city planning, wide boulevards and a park that crosses the entire city, it looks more like Europe than a Central Asian country. With its national parks, monuments, squares, and museums, the city has a lot of places to see. 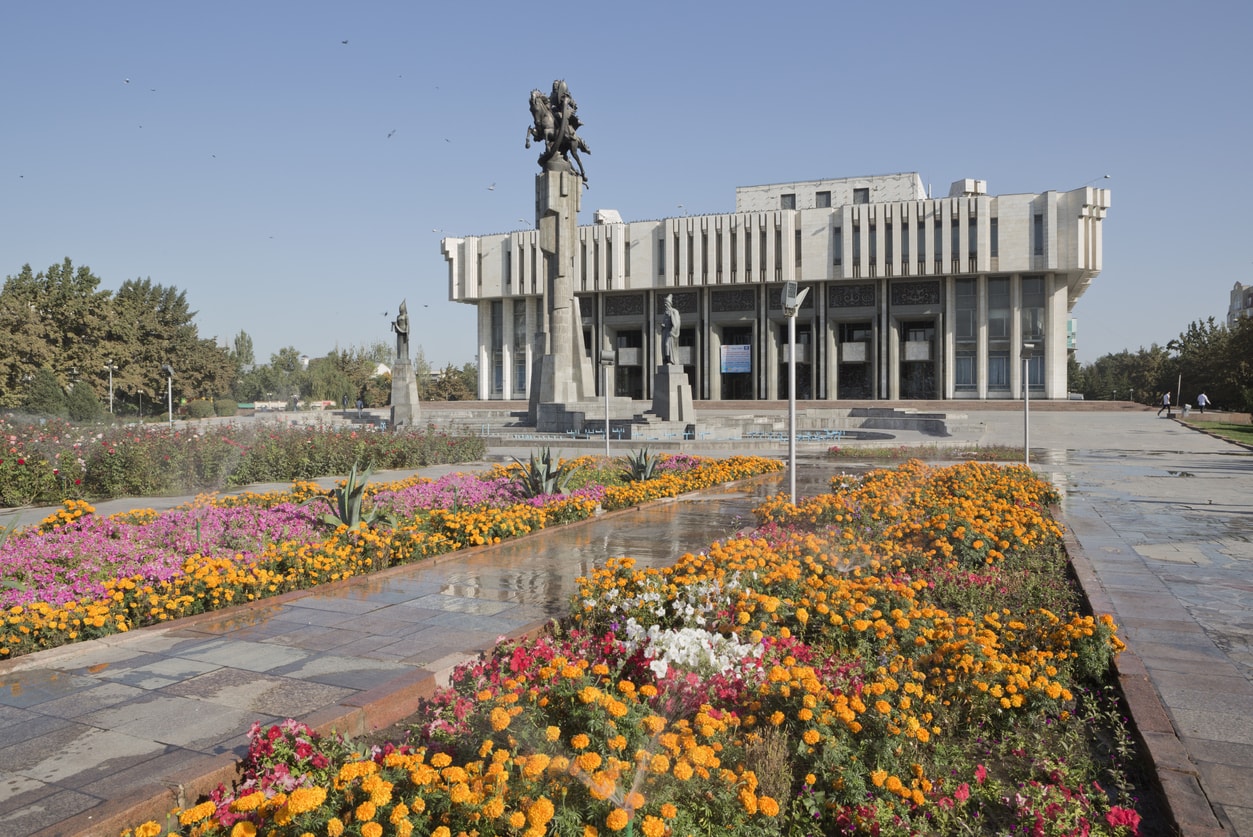 Burana Castle, Gapar Aitiev Art Museum, Osh Market and Ala-Archa National Park are some of the must-see places. The big square, the heart of the city, Ala-Too is decorated with fountains and cafes and venues. There is a statue of Manas, the legendary hero of the Kyrgyz. Regional points of interest include National Historical Museum and Kyrgyz National Museum of Painting. 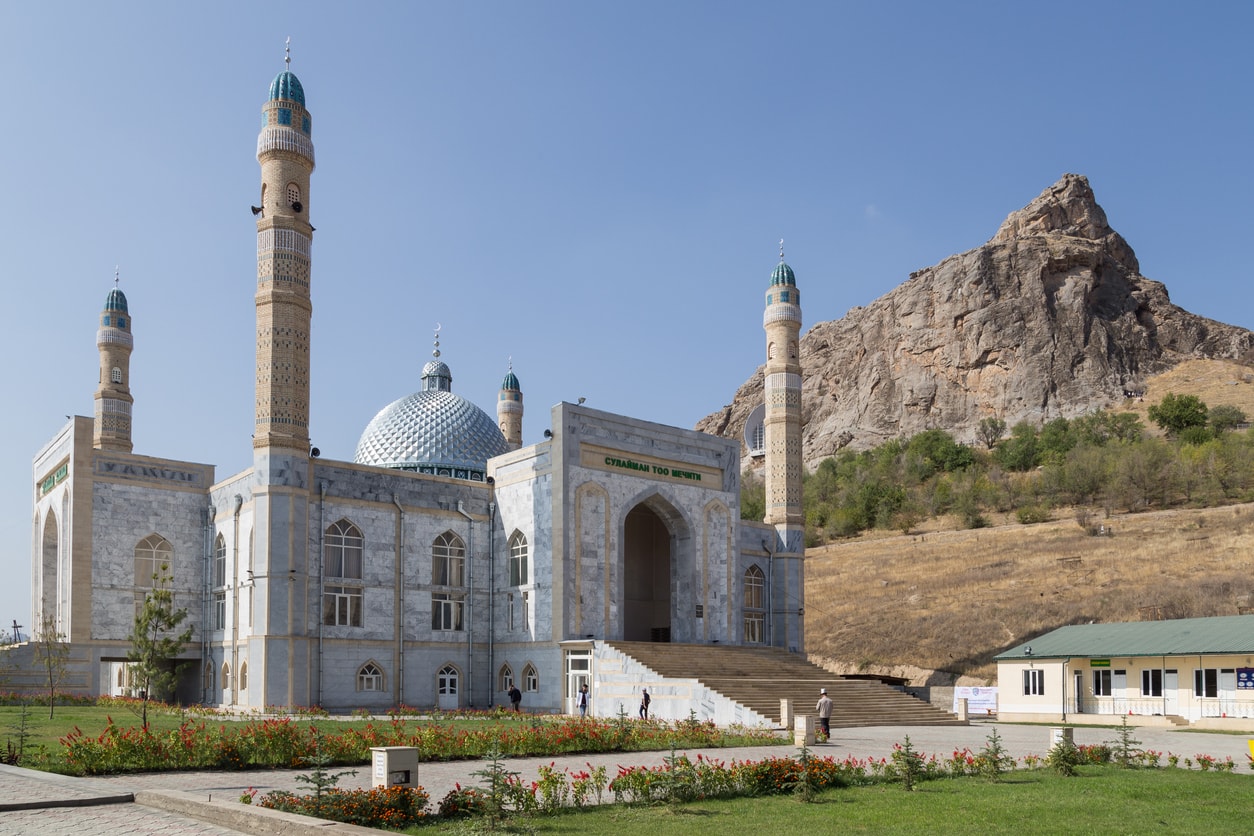 Lake Issyk is the largest of the lakes in Kyrgyzstan and one of the most important tourist spots in the country. Issyk Lake, the second-largest crater lake in the world, is located in the northern part of Kyrgyzstan, 1609 meters above sea level. The lake does not freeze in winter despite the coldness of the surrounding snowy mountains. With its crystal clear waters shining like silver, the lake is a favorite place for Russians and Kyrgyz people during holiday periods.

Where to Stay in Kyrgyzstan?

Hotels are generally preferred for accommodation in the country. In large cities, hotels can be found for every budget. In smaller cities, it is possible to stay in houses supported by the CBT, the Kyrgyzstan Community Based Tourism Association. You can also experience a different accommodation in a tent named “bozuy”.

What to Eat in Kyrgyzstan?

Kyrgyz dishes consist mainly of meat and pastries. As in Kyrgyz food, Kyrgyz soups contain dough and meat. Minced meat is never used. Meats are offered as pieces of meat even in soup. The meat is often accompanied by noodles and sometimes diced potatoes. The most famous dish of the country is beshbarmak prepared with sheep or horse meat. Shashlik and soups are also popular foods. In addition to meat dishes, rice is usually served as plov. Kımız (mare milk), which is unique to Central Asia, is among the tastes you should try. Below are some restaurants where you can taste these famous Kyrgyz dishes.

There are many alternatives for shopping in Bishkek and Osh. On Manas Street in Bishkek, you can find traditional caps and various leather goods. Traditional Kyrgyz clothes and hand-woven carpets and rugs are among the souvenir alternatives. Osh cities are famous for their spices. You can find various spices and local products in Osh. Bayalinova Street and Jayma Bazaar are popular spots for souvenirs.

Things to Know Before Visiting Kyrgyzstan

Kyrgyzstan's nightlife means Bishkek nightlife. Bishkek has hundreds of bars, cafes, restaurants, and clubs. Some places serve as a bar early in the night. After 11 at night, the bar gradually turns into a club. One of them is the Zavod Pub in Bishkek. Although nightlife is not very active during the week, it is especially lively on Friday and Saturday nights.

Some countries citizens don’t need a visa to get to Kyrgyzstan. However if you need one, it is recommended that you apply in advance to have a stress-free trip. You can check if you need a visa from here.

You can learn the details of the Kyrgyzstan visa application process from the "Kyrgyzstan Visa Guide" article.

What is Kyrgyzstan nomad culture?

Although the Kyrgyz people are now settled, nomadism is an integral part of national identity. Especially in summer, they live in the dormitories called Bozüy on the plateaus and plains. Horse riding and sports activities that require agility are also part of this culture.

How many regions are there in Kyrgyzstan?

The country consists of 8 regions, including the capital Bishkek. The oblasts are named Bishkek, Batken, Chuy, Jalalabad, Narin, Osh, Talak and Issyk Lake.

What are the working hours in Kyrgyzstan?

Institutions are open between 09.00-18.00 on weekdays. They are closed on weekends (Saturday- Sunday). Most markets and shops are open on Sundays.

What does the flag of Kyrgyzstan mean?