Venice, The Queen of the Mediterranean, is an island city in Northeast Italy. The city was built on 118 submerged islands with wooden planks. The city takes its name from the ancient Venetii people that settled the region in Roman times. Under the Merchant Republic of Venice, the city became the first real international financial centre in the 9th Century and also was given the name “La Serenissima”, ‘The Most Serene’, by the Byzantine Emperor and this later became the city’s nickname. Venice is most well known with the gondolas floating in the Venetian canals and the world-famous masks of the “Carnevale di Venezia”, the Venice Carnival. Venice is a UNESCO World Heritage Site. The Veneto Region of Italy consists of Venice and her neighbour cities Padua and Treviso.

How to Get to Venice?

The flight duration is 2 hours and 30 minutes.

You can buy your direct flight tickets to Venice from İstanbul from here.

Venice Marco Polo International Airport is located 13,8 kilometres away from the city center. You can get there with airport taxi, water taxi, bus or express bus.

To get to the city centre from the airport, with each of the options, it takes (prices are for 2019):

If you plan on staying inside the City of Venice, it is very possible to walk to wherever you want to go. If you plan on exploring the outer islands of Venice, the city has a very practical maritime public transportation system the details about which can be found here. The site is available in English. 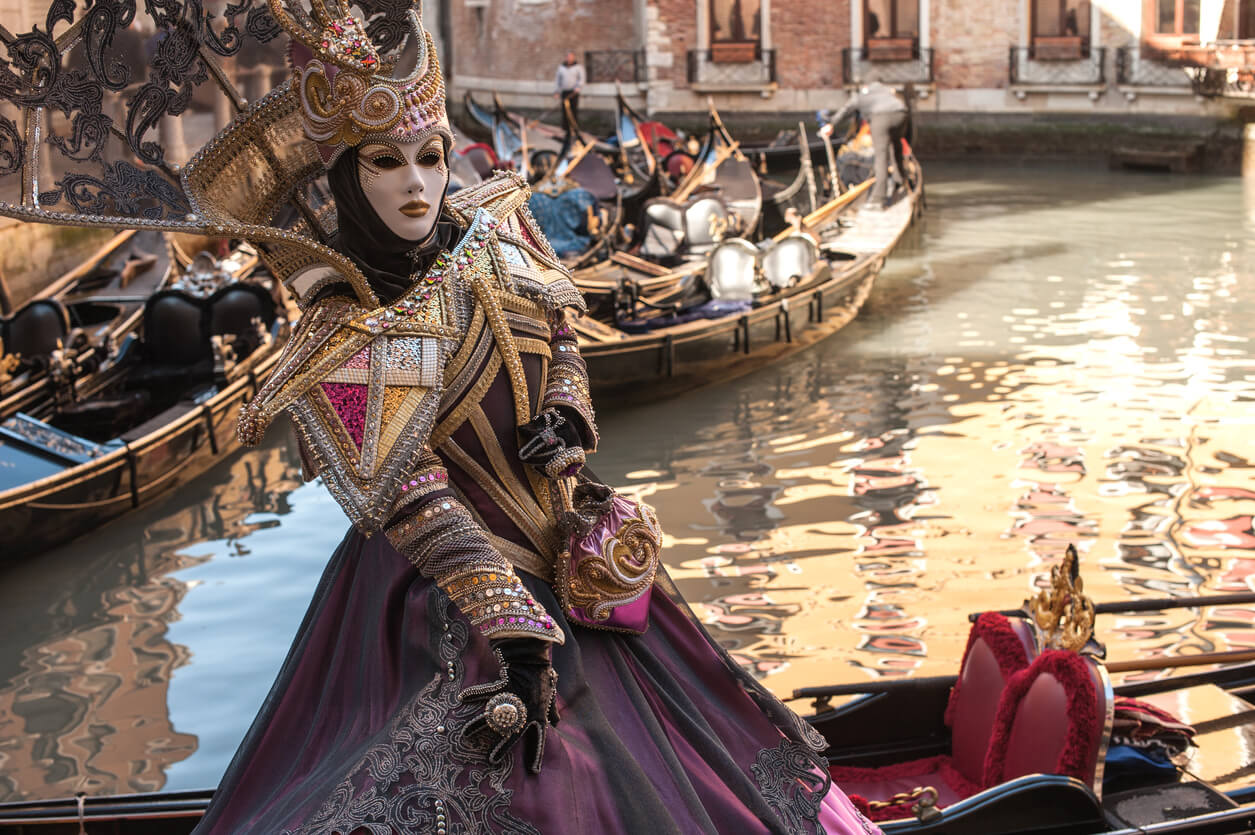 Venice has a typical Mediterranean climate that is generally warm and temperate, but rainfall is significantly high throughout the year. The best time to be in La Serenissima is April-May or September-October. During these months the weather is warm and agreeable, and rainfall is comparatively rare. That being said, you may want to plan your visit around Venetian festivals, information about which is available in the next section. We recommend that you stay at least three or four days in the city to truly appreciate its beauty.

Places to Visit in Venice

Venice has been among the foremost cultural capitals of Europe throughout history. The city was a major Italian capital for centuries before the Unification of Italy, and although the city itself is relatively small in size, there are still many landmarks to be seen.

There are four bridges in Venice over the Grand Canal and Rialto is the oldest and connects the San Polo district to the San Marco district. The original bridge was first built in 1181 but has since been rebuilt many times. It is not only one of the primary tourist attractions in Venice but also one of its icons. 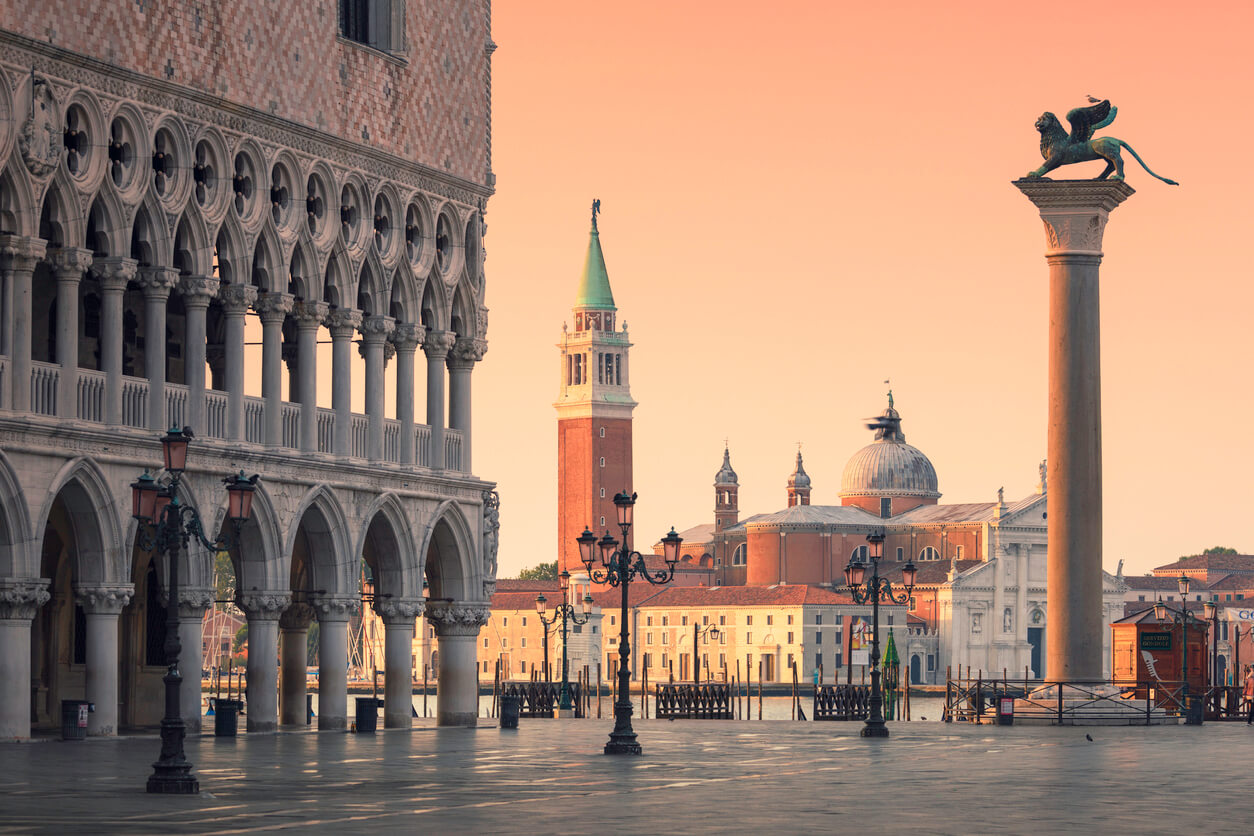 This is the main public square of Venice and is known by the locals as “La Piazza”, the Square. As the social, political and religious centre of the city, the Piazza hosts many landmarks itself. The wonderful columns of St. Theodore, of the Lion of Venice, of the Judgement of Solomon and the Pillars of Acre rise above the square while The Doge’s Palace and the Basilica of San Marco grace the square with their beauty.

Before the Unification of Italy, Venice was the capital of the Merchant Republic of Venice, the leaders, or dukes, of which were called “Doge”. Found in the Piazza San Marco and built some time in the 10th Century, the palace is a wonderful display of Venice’s glory days. The palace was more of a castle in its infancy, with towers and fortifications, and the Doges of Venice ruled the Mediterranean from this building for close to a millennium. It has, since then, however, was rebuilt and restructured, new sections were added and the old were remodelled and the Palazzo Ducale, in its current form, came to be more of a palace than a fortress.

St. Mark’s Basilica, the full name of which is “Patriarchal Cathedral of Saint Mark” (Basilica Cattedrale Patriarcale di San Marco), is the most famous and most awe-inspiring church in the city as well as one of the best examples of Italo-Byzantine architecture. Found in the Piazza San Marco, adjacent to the Palazzo Ducale, the very first sections of the Basilica were built in the 11th century. It started out as the Doge’s personal church and was therefore the symbol of the Doge’s and in turn of Venice’s power along with the Doge’s Palace. This is much evident in the gold mosaics that adorn the Basilica and cover almost all the interior. This basilica is without a doubt the most glorious and magnificent part of the city.

Where to Stay in Venice? 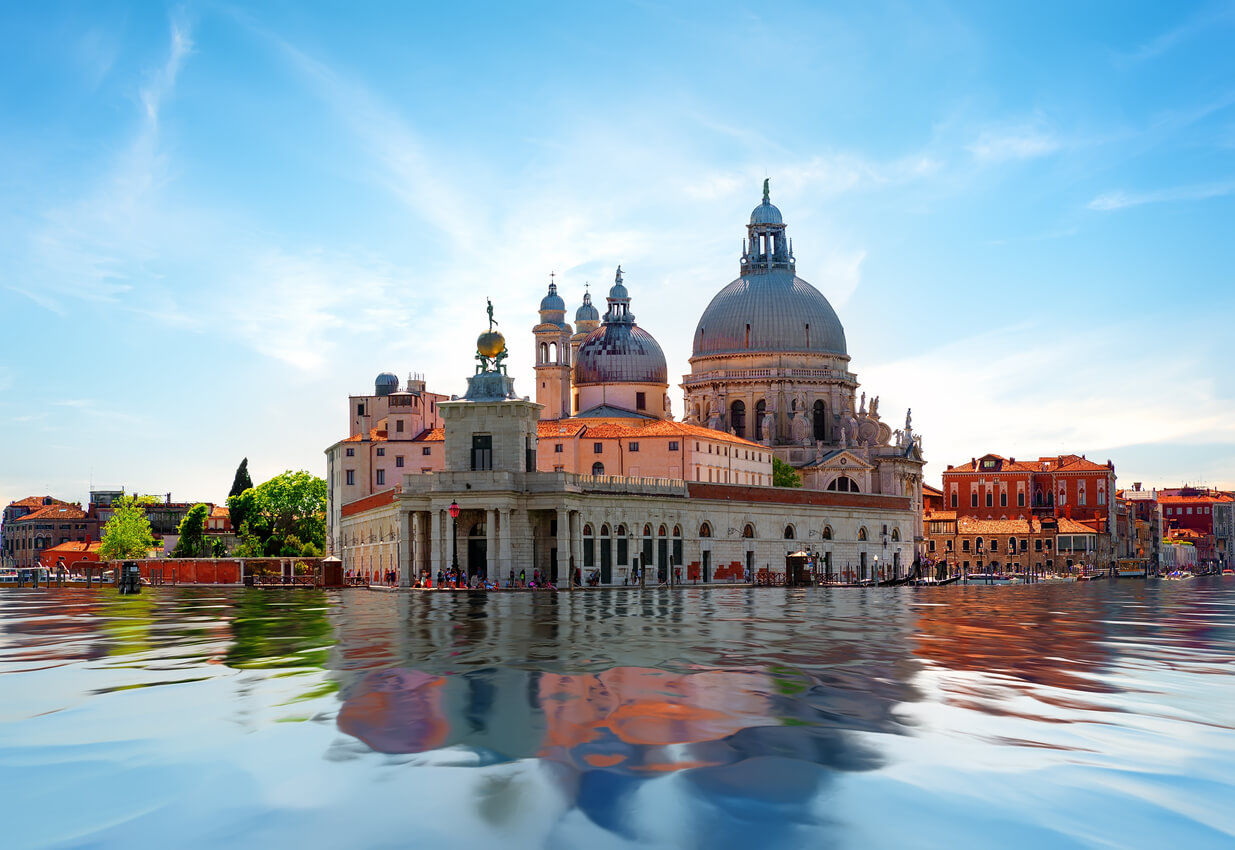 Being a vibrant tourism city, there are hundreds upon hundreds of hotels in Venice. The more luxurious hotels are situated on the banks of the Grand Canal, with wonderful views. The budget accommodation options are mainly located near the main train station.

What to Eat in Venice? 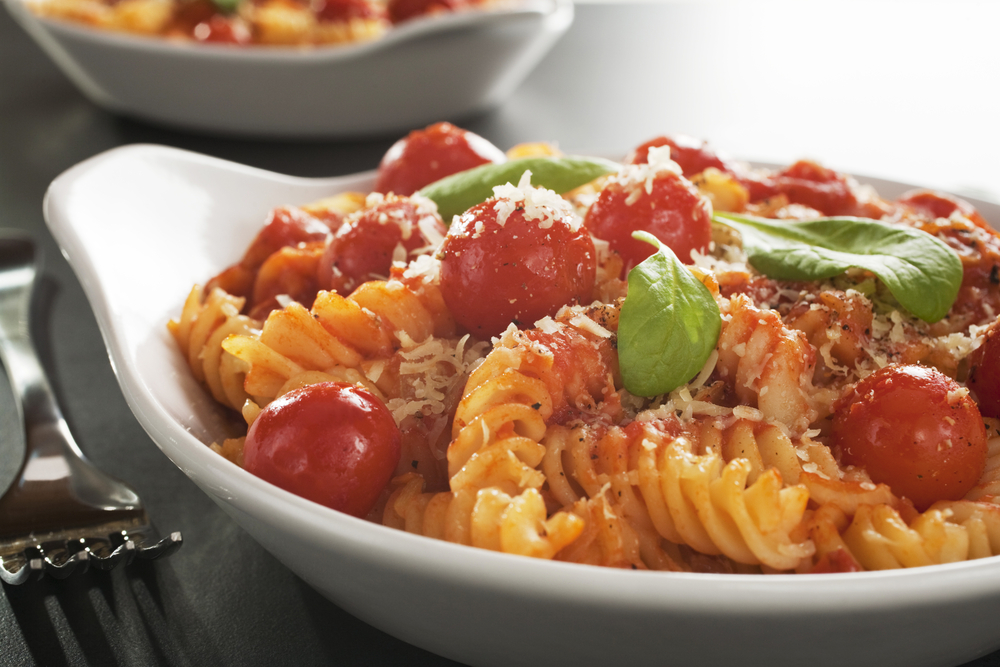 Italian cuisine is of course very prevalent in Venice, which means the pizza and the pasta are the centrepieces of the cuisine. That being said, it is noteworthy that Venice often “localises” these foods by adding fish in them. Apart from the typical Italian cuisine, Venice has two iconic food items of its own. The first is the “Fritole”, a baked food and the second is called the “Baicoli”, which is a hard biscuit invented for Venetian sailors to eat during long voyages. Canne Regio is the street with the best and most restaurants, and Harberia is a famous fish market. 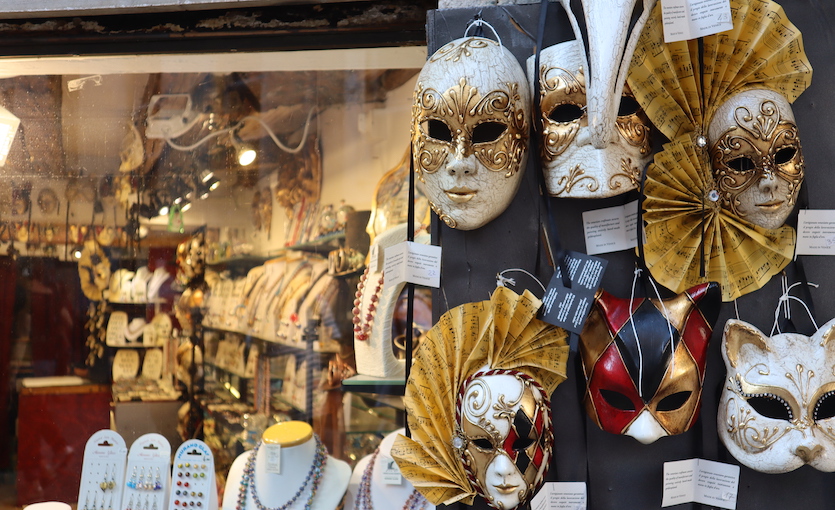 Venice is most famous for her carnival masks. Originally Venetian, these masks have since then come to symbolise Italy in general and can be found in every souvenir shop.

Le Mercerie and San Samuele are the two streets famous in Venice for shopping. Le Mercerie specialises in fashion and clothing while San Samuele is more suited for souvenirs and handcrafts. 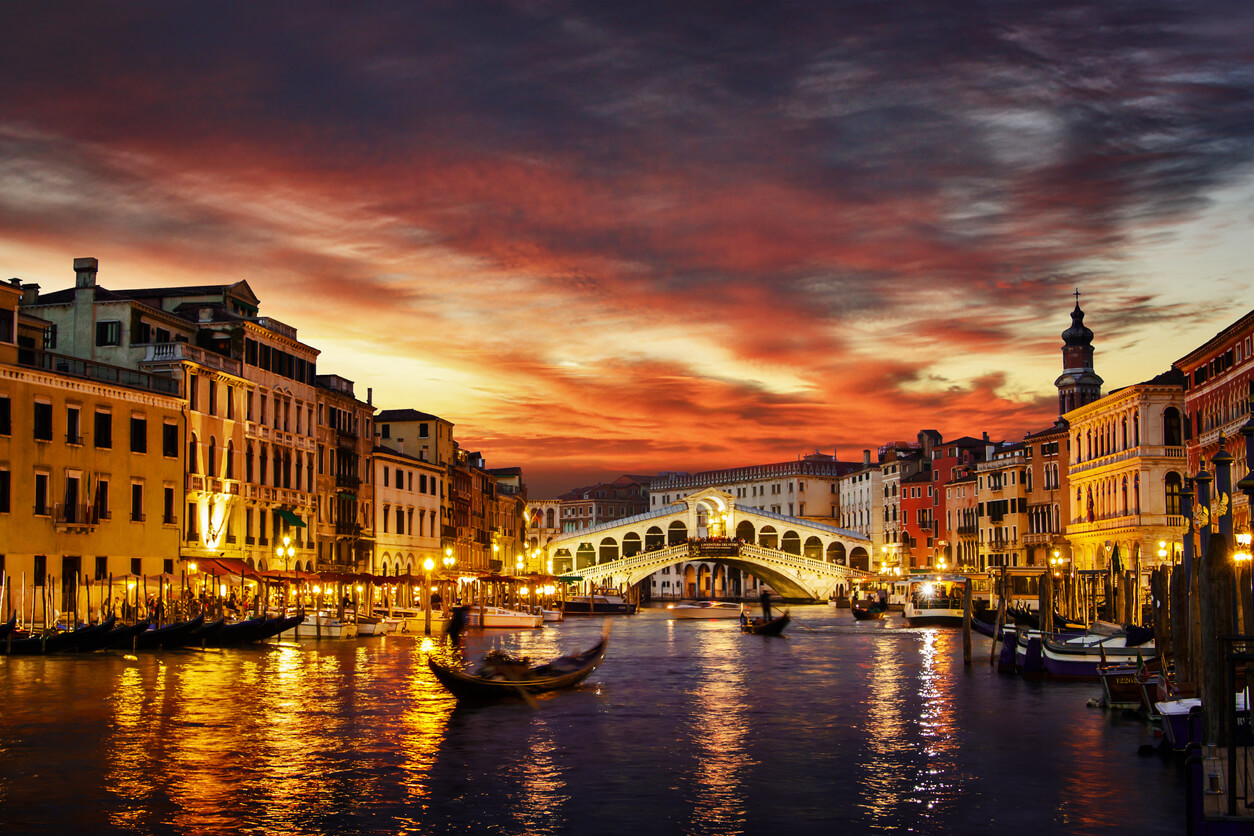 Venice isn’t famous for its wild nightlife. People usually choose to spend their evenings in bars and cafes rather than night clubs. Campo Santa Margherita is famous for being the student centre of the city, as well as for hosting outdoors concerts.

Things to Know Before Visiting Venice